📢 We’re looking for beta testers! Sign up today and use Duelbox for free! 📢

Why Competition is in our Blood

Love it or hate it – competition is in our blood. There are many reasons why, but basically it comes down to two important factors. First, we are all humans. And second: competitions are fun to participate in. You will find that contests are literally everywhere from social interactions to economy from romance to foreign diplomacy. Why is it so engaging to compete? Why do we love competing?

It is no exaggerated statement that we live in a vying environment. The taller tree gets more sunlight, the early bird catches the worm. No wonder that the history of competitive games can be traced back as far as human history goes – like Assyrian and Aztec empires.

Ancient peoples – just like us, living in a modern times – spent quite some time on planning, organizing competitions and playing games. Some were inconceivably brutal and bloody – like the fight of the gladiators in blood-soaked arenas of the Roman Empire. But other contests were sophisticated and noble – like the ancient Greek Olympics, a true inspiration for the modern era games.

It is worthy to note the panhellenic games of ancient Greece. It was a place where representatives of the city states were equal and every freeborn Greek man were allowed to participate. Victors received great honor: poets wrote long poems in praise of the winners. And many of these victory songs (“epinicians”) have lasted far longer than any other honor made for the same purpose.

Competing: Not Only for a Selected Few 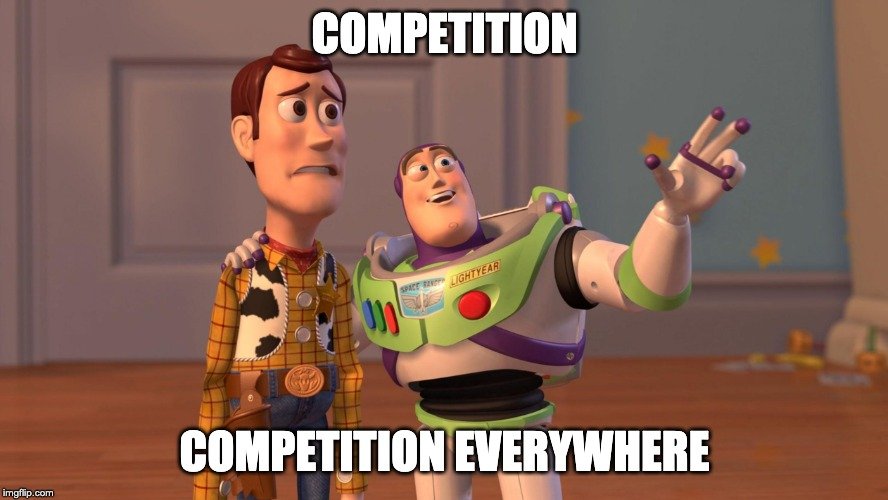 Psychologists say it is largely due to the human nature that we contest with each other as individuals, in smaller or larger groups – and even as nations. (If you find that hard to believe, have a look at the list of the most competitive countries in the world by World Economic Forum). Competition is present in almost every aspect of our lives: social, economical, and even romantic… In modern democracies competition plays a major role in both domestic politics (after all we vote for our leaders every now and then), and foreign relations (states compete for power and resources). People contest with each other in sports and other games. Even the quest for love is rarely free of competition.

No wonder companies have long discovered the potential in competitive human behavior. While competition is to be found everywhere in modern society, competitive games are still gaining ground. And experts say they still have a long way to go. Daily tasks at the workplaces and conferences are now gamified and it helps a great deal in keeping up interest, unleashing the creative power of colleagues, and many more. Scientists agree that gamification has positive effects on individuals. But how and why does it work? Why do we find it more attractive to participate in a “game” than simply doing the daily chores? And what profit do companies gain?

Participating in competitions is a good way of self-improvement, there are many reasons why it can help you be more successful. Being part of a contest keeps everyone motivated. It gives energy to help overcome failures and focus on a bigger goal. It also helps set goals and by that it enables you to aim at reaching those targets. Competitions require participants to become better problem-solvers and thus help unleash greater creativity. It can also help you gain deeper levels of self-knowledge as it gives way for self-reflection.

Psychologist generally agree that being competitive helps people to grow and improve, but it is also important to be respectful of others. Competing can help you to be a ‘better you’ – just don’t forget that competition is rivaled only by its better half: cooperation. Remember: it’s not about winning – it’s about doing your best. Competition paired with cooperation can help you achieve new heights. Just do the right thing for the right reasons.

But you don’t need to rationalize everything. Playing games and participating in contests is also good… well, because they are fun and enjoyable. Of course, competitions tend to be more entertaining if you actually win, but don’t get hypercompetitive.

Did you know, that while you try to do your best in a contest even your body helps unconsciously? Studies show that when playing a game or doing your part in a competitive event your mind will send command to release “feel-good” neurotransmitters – such as oxytocin. These are natural “boosters” that make you feel happier and more satisfied.

We will conclude this brief overview on competition in general with a quote from a sportsman whose competitiveness was well-known on the basketball courts. And Michael Jordan shared his secret that simply was: “Just play. Have fun. Enjoy the game!”

Spin wheel games can be a great way to boost team-building efforts. Here, we look at games that will help your team collaborate better.

Spin wheel games can be a great way to boost team-building efforts. Here, we look at games that will help your team collaborate better.

To poll the audience has become almost cliché at conferences. Here we take a look at how to breathe life into this common activity.