Trade Show Games for Your Booth

Standing out at a trade show is a tall task. Trade show games help bring people into your booth. The key is to know which ones to showcase.

At any given convention, there are dozens of tables trying to draw people in with drink cozies or stress relief balls. So many that it becomes white noise. Digital trade show games are an eye-catching way to stand out at a crowded show.

As trade shows begin to pick up at a rapid clip, you want your booth to stand out. Reaching for a game is wise, but only when you can find the right one. You need something that will draw people in and get them to stick around long enough to make a valuable connection. In this article, we take a look at trade show games for your booth. 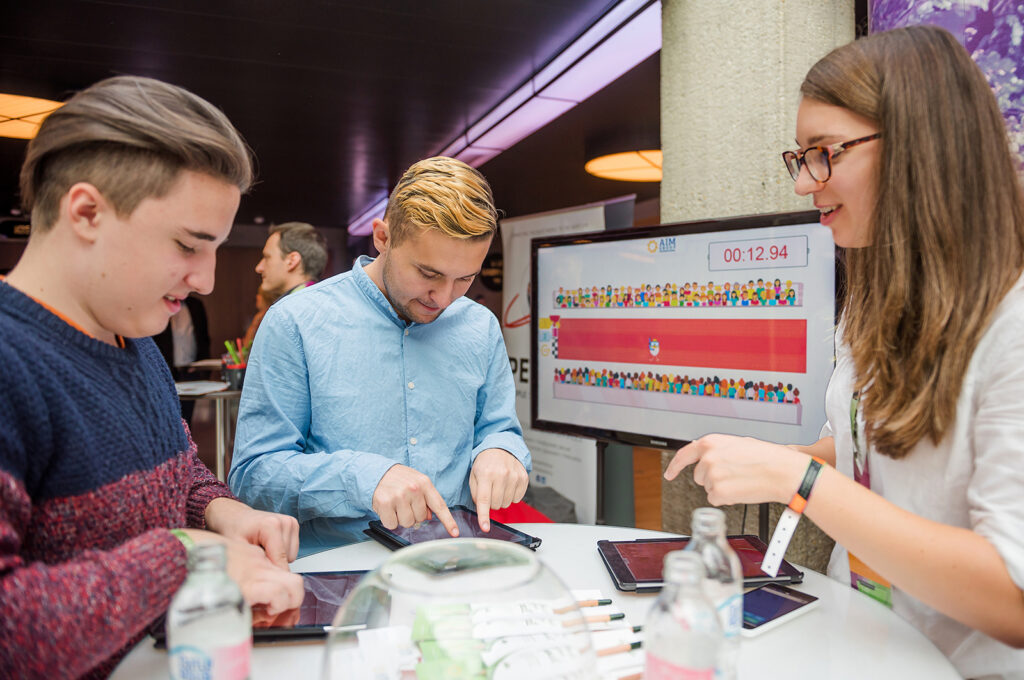 Race Game is an exciting, eye-catching game that allows participants to play as a range of silly avatars. After scanning a QR code, visitors can engage in a short, fast-paced race that sees their kooky characters sprint across the big screen together!

The game can suit a large number of players making it a good option for trade shows, where you are hoping to interact with as many people as possible. Race Game is a great hook to bring people over to your booth.

Live trivia is a fun, engaging way to get people to stop at your booth and linger. One of the nice things about trivia is that it can be customized to suit the needs of the situation. You can tailor yours to tell a story about your brand, reference the convention itself, or just touch on topics you think your audience is most likely to take an interest in.

Live Trivia can also be adjusted to suit a wide range of time frames. You can host very short-term games that suit the fast-paced environment of most trade shows, or pivot into a longer event if you feel it’s more advantageous to your purposes. The flexibility gives you the power to make the choice that will be best for your goals.

Spin Wheel games are great for trade shows because they are at once eye-catching and incentivizing, providing people with a concrete reason to stop at your booth. The way it works is simple: participants spin the wheel, which will then stop on a prize. The wheel can be customized, allowing you to pick prizes that are appropriate to the occasion. And with the Duelbox Spin Wheel you can even require participants to provide an email, phone number, or whatever information you’d like before they can spin, helping you with lead generation.

Finally, the Scavenger Hunt. You can be as creative with this as you want to be. As the event organizer you can hold a scavenger hunt that incorporates the entire tradeshow with multiple booths, rooms, companies, etc involved. But for companies with just a single booth, you can create a Scavenger Hunt that is just focused on you. Hide QR codes around the venue in public areas. This will act as advertising for you and will also ensure players keep you on their mind the entire time they are traversing the show searching for codes. This game works because it keeps you in the mind of trade show guests even after they leave your table.

To stand out at your next trade show you’ll have to get creative. Duelbox offers these four games and more that you can build your booth around. Gamifying your booth is a proven way to increase traffic and lead generation. Book a demo with us today to learn more.

Duelbox has 8 different Live Trivia question types to choose from. Here’s some anagram questions for your next show.

Duelbox is welcoming a new team member! Our newest addition, Gabor, is joining the team as a UX/UI and Graphic Designer.

Duelbox is coming to live sports! Duelbox will increase fan engagement in the arena and provide a new sponsorship revenue stream for teams.